Initially Stubb served his food glazed with the delicious sauce. When Letterman from the tonight show tasted his BBQ sauce, he could not resist, but invite Stubb himself on the show. What makes them so special? Stubb himself answered: “Love and happiness”

C.B. Stubblefield, simply called "Stubb",  is known in the BBQ scene as the West Texas hero with hands as big as beef steaks. His declared aim was not just to make BBQs, but friends! Just the sight of the sauce bottles should make every BBQ enthusiast feel this special spirit, no matter whether he sings blues songs around the campfire or enjoys slow-smoked beef breast with coleslaw and beans. 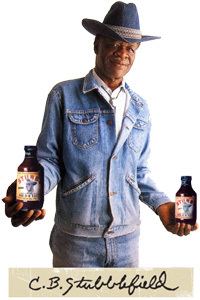 Up-and-coming musicians like Joe Ely and Tom T. Hall came to Stubb's to sing for their dinner. Little by little his small restaurant gained national attention and was soon considered "place to be" in the Blues and BBQ scene. In the mid 80's Stubb moved his restaurant to Austin. Many of the up-and-coming musicians of the time had meanwhile reached a respectable rum and were happy to stop off at the new restaurant. Presidents and celebrities also came to Stubb's to feel the unique love and joy of this brand.

By popular demand, Stubb's began to bottle and sell its sauces. He filled the sauces by hand into jam jars and whiskey bottles in Joe and Sharon Ely's kitchen. Joe Ely took some of the sauces to an appearance on David Letterman's late night show and shared them with the production staff and the famous talker. The enthusiasm for Stubb's sauces was like a Texas bush fire and not much later Stubb himself was invited to the talk show. When Letterman asked him what made his sauces so special, Stubb's replied with the sentence "Love and happiness" which is still famous today.