Do you know the brand Kraft, expert for Ketchup from the 80s? No, then you're either too young or not a real ketchup fan! We bring the best ketchup from all over the world to your table! 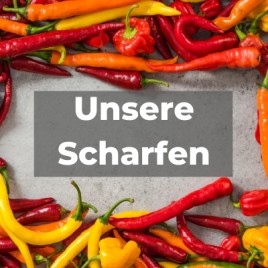 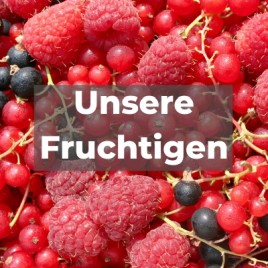 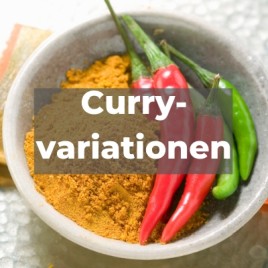 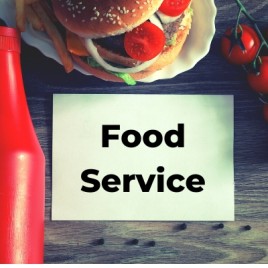 Ketchup is known by every kid. The spicy red tomato sauce from the bottle, which is an integrated part of dishes such as French fries and co. But the story of ketchup is, how could it not be, a little different than most would think. Ketchup was not red in origin, nor had the sauce anything to do with tomatoes - and of course it was not used with French fries. But Ketchup did not make a grand triumph over the entire world until the tomato landed in the bottle. Of the original basic ingredients - as it can be suspected - there is hardly anything left in the tomato ketchup found today.

Fish ketchup? Sounds strange ... but it is so.

There are many possible derivations of the origin of ketchup. The most popular of them has its origin in Asia. From there, a sauce was brought to the UK, which was based on fermented fish. So, a fish sauce in the literal sense. As it is with almost all recipes that came from another part of the world in the European area, ketchup - which was written in the first cookbook mentions as "catchup" - was adapted to the European palate. The fermented fish disappeared quickly, but at the beginning of the 18th century, anchovies, shallots, vinegar and spices were still on the list of ingredients. But still not very similar to what is known today as ketchup.

The tomato came late into the ketchup.

While the spicy sauce, especially in England quickly became popular - based on fish, mushrooms or walnuts - the tomato actually came into the limelight only 100 years after the mention into the first cookbook. And more than 50 years after that, the first finished products were available. Some of these rather strange ketchup variations have survived to this day: "Mushroom ketchup", for example, is still very popular in England. One possible reason why no one tried to stir tomatoes into ketchup before 1800 may be that tomato sauce (as in Italy) was virtually unknown in England. From England the way to the USA was not far.

From a by-pass product to world leader

In just 50 years, a US company has succeeded in becoming the undisputed world market leader with the new product - and it still remains so today. In the beginning, tomato ketchups were mostly produced on a small scale, in larger quantities rather as a by-pass product or even as a by-pass product of the tomato canning industry in emerging North America. The Heinz company experimented with many different recipes - and finally got the hang of it: the Heinz tomato ketchup sold millions at the beginning of the 20th century. Not only in the USA.

Germany could be described as a late bloomer in regards to ketchup. Only after the Second World War - and especially by the troops of the Allies, who were stationed in Germany, ketchup came into the use of German households. Here, they first used imported goods - since neither know-how nor equipment or raw materials were available in the direct postwar period. But that changed dramatically in the 1950s and 1960s: the German ketchup industry was booming, fueled by popularity-winning fast foods such as fries, burgers and of course the original German Currywurst.

Three for all cases

Today, there are mainly three basic variants, which are mainly common. They all usually share as basic ingredients tomato (mark), vinegar and sugar as well as spices. These three basic varieties are tomato ketchup, spiced ketchup and curry ketchup. While at first glance the tomato ketchup appears as the "most original" product, it is more likely to be the spiced ketchup, which comes closest to the "original" from the point of view of its genesis. Curry ketchup, however, is to a certain extent a child of the "modern" snack kitchen, although it has been around for a long time: in parallel with the triumph of the Currywurst, the curry ketchup has also made its way into German kitchens.

Tomato ketchup - pure? Not at all. Delicious? Surely

As the advertising often suggests, tomato ketchup only consists of tomatoes. It is of course, not so true. Pure tomatoes are also available - ideally as canned tomatoes. And here, too, the story takes a twist again. While tomato ketchup has long been a waste product from the canning industry, which mainly used unripe tomatoes or those that did not meet the quality requirements for canned foods, the tide turned in the 1920s. Since it was established that green tomatoes could be harmful to health and at the same time ran the quality race among the established brands, the producers went quickly to about ketchup only fully ripe fruit to use. Unlike spicy and curry ketchup, the tomato ketchup, as its name suggests, focuses on the tomatoes. Vinegar and sugar are usually used as additional flavorings and at the same time as preservatives. Their taste properties support the basic note of tomato - sweet and sour.

Spicy ketchup - it's a question of taste

While the tomato ketchup is aimed specifically at the tomato taste, spicy ketchup is dominated by an individual flavor of spices. The tomato, however, merely provides the basis - instead of the usual mushrooms, walnuts or fish. The imagination in the spicy kitchens are limited, so that the number of actual flavors is almost uncountable. Nevertheless, in addition to tomato paste, vinegar and sugar and a number of spices such as allspice, cloves, pepper, chilli, garlic and cumin are quite common. But also, cinnamon, coriander and onion are often encountered in the recipe. Also used besides the spices, sometimes you can find fruits that are not initially suspected to be found in a ketchup: mango, orange and even strawberry are found in some creations.

Curry ketchup is by definition a ketchup whose main flavor is dominated by curry flavor, but that says nothing about whether it is based on a tomato ketchup or a spicy ketchup. Conceivable is both - and of course also done in practice. So, both of them are made from the classic tomato ketchup of the well-known manufacturers, the only difference to the normal recipe is that a curry powder blend is added. But on the other side there are also innumerable spicy ketchups that are created especially for the market of curry ketchup - which, quite fittingly, are often touted as curry spiced ketchup. Especially with the latter, not very often chilli plays an important role as an ingredient. A trend of the Currywurst group has also sprung up in recent years: after some snacks have been served to offer spicy sauces for Currywurst, the Ketchup producers have also reacted and introduced hotter versions on the market.

Ketchup is definitely not just for fries & Co. In addition to tomato dip sauces, ketchup is a refined ingredient that also refines many main courses and gives them the right taste. Here are our 4 ketchup recipe favorites that you should try:

Well, got the taste? Then go new ways and try the (almost) infinite variety of the spicy sauces. A tasty, handpicked selection can be found in our shop!

Ketchup can do more! With this spicy dip, the fondue is skilfully beefed up or the baguette becomes twice as tasty. And if you want to go fast, the spicy dip makes an excellent uncomplicated sauce on grilled meat. 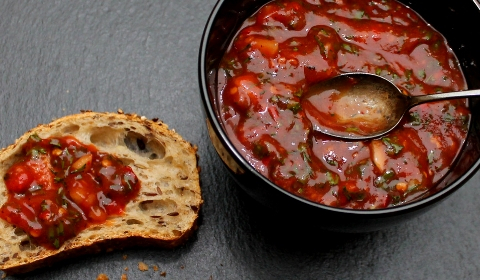 Full-bodied enjoyment with a lot of good in it. Brings strength to the body and warms up on cold days. 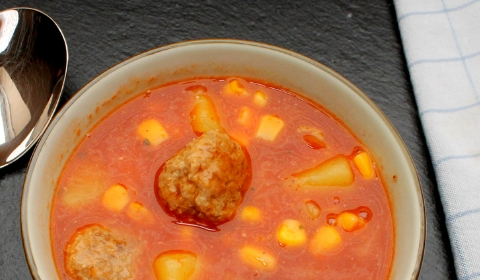 Peel the potatoes and cut into 1 cm cubes.
Clean the peppers and cut into cubes of about 1cm.
Sprinkle both in 1 tbsp. hot oil for 3 min. Add the broth and cook for 10 minutes, then add the tomato paste and the tomato juice.
Mix the minced meat with egg yolk, cream, breadcrumbs and fried onions to a smooth dough, salt and pepper and form into small balls and fry in 1 tbsp oil in a nonstick skillet for 8 min.
Drain corn and beans and add to the stew with the meat balls and ketchup. Cook for 5 minutes, season again with salt and pepper.

Originally a traditional snack from Russia and Ungern, the juicy meat skewers quickly conquered the local cuisine. On the spit comes what tastes - Here is our favorite variant: 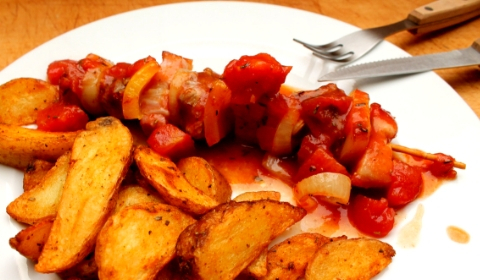 Dice the pork neck, the bacon and the peppers and cut the onion into cubes.
Meat, bacon and vegetables alternately stacked on the skewers. Then fry them in hot oil all around.
Mix the tomatoes, ketchup, broth and thyme in a bowl and season with salt and freshly ground pepper.
Add this sauce to the skewers in the pot and place on a grid in the 180 degrees (top / bottom heat) preheated oven and finish cooking in 25-30 minutes.
To taste serve next to French fries or potato wedges.

You still lack the right idea for the next party or the cozy couch evening with the family? How about some meatballs and tomato-fiery notes? 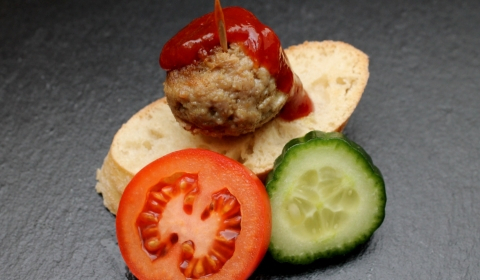 Put the minced meat in a bowl and mix with egg, breadcrumbs, salt, freshly ground pepper and curry powder and form into small cutlets.
Roast the meatballs in a pan for 8 - 10 minutes until golden brown.
Season the chilli ketchup with the mango chutney, a little salt, Tabasco and some curry powder. Serve the meatballs with the mango ketchup.
This fits very well with baguette and fresh salad.

Ketchup is the kitchen star?

As crazy as it may sound, ketchup has almost completely lost the niche existence as an "unhealthy fast food accessory" over the past few decades. Even top chefs boast of their own creations, which can be found either as a finished product or as a recipe in cookbooks. Johann Lafer and Jamie Oliver are certainly only the most popular representatives - but even in starred kitchens it is not very rare to find a ketchup (and sometimes even a purchased version). But why not? The classic image of the kitchen star, which decorates minimalist masterpieces on the plates, has long ceased to exist. After a small food stall in Singapore, comparable to a (admittedly very good) snack, was ennobled with a Michelin star, also the high class of gastronomy seems to pay tribute to the taste of time. The guest can of course only be happy - because they can put a new taste in the old familiar.

How ketchup is meanwhile anchored in our culture, one sees above all how often it is referenced. In horror movies (especially the cheaper produced) ketchup is often derogatory in the use of artificial blood, a summer hit was the "ketchup song" of the band "Las Ketchup" and not only does the Currywurst Museum devote a significant portion of the tasty tomato sauce, but The Heinz company has also built its own museum for the red golden sauces.

All prices quoted in the Pepperworld Hot Shop are inclusive of VAT, plus shipping costs depending on the country. So that you can shop comfortably, you have the following payment options available through our partners PayPal Plus and Amazon Pay

Delivery in Europe in 3 to 5 days, with DHL goGreen (exclusively climate neutral).

Important information in order to save: The small truck sign in the cart lets you know how far away you are from a free delivery! For further discounts please look at the bulk prices that are available for a lot of products!