The Bhut Jolokia Chili comes from Assam in India. The world's former hottest chilli in the world brings fire into your life! Whether in Chilli cultivation or in the hot dishes, Bhut Jolokia is for many Chiliheads the ultimate when it comes to Chillis!

The Bhut Jolokia is a Chilli from the variety Capsicum Chinense. In 2006 it broke the world record and made it into the Guinness Book of Records as the world’s hottest Chili. Herewith, the Bhut outclassed its predecessor, the Red Savina, which is only half as hot. 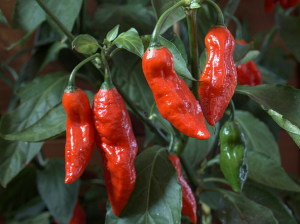 Maturation: From green to red

Description: The Bhut Jolokia held the pungency record for a long time and brings over 1 million Scoville on the scale. Already the different names indicate the enormous heatness: Ghost Pepper / Bhut Jolokia = ghost chili, Bih Jolokia = poison chili, Raja chilli = king of the chillies...
In the year 2000 this variety was first noticed. It was said that it would surpass the pungency of the Habaneros by far, which was finally confirmed. But at the beginning there was some confusion with the Indian PC-1, a Capsicum frutescens, which doesn't come close to the pungency of the Nagas. In addition, confusion with the varieties Naga Morich and Dorset Naga is frequent. Or rather, there is no agreement whether all these varieties are the same or not.

Own experiences: The Bhut Jolokia is one of the biggest representatives of the species C. chinense with us on Pepperworldhotshop so far. From the beginning we had strong plants, which also grew up to a stately height. The fruit formation started, compared to other C. chinense, a little later. Nevertheless the fruits were still ripe. We cannot confirm the frequently stated 100 days ripening time. In our case, the fruits were not much slower in their ripening, as with the other C. chinense.
For the fruits themselves, we can only say... good aroma, but simply hellishly hot.

Where does this exceptional Chilli come from?

The Bhut has its roots in India, specifically in the north-east, in the region Assam, which is more familiar to us because of its tea production. That is also where it is mainly cultivated today and it is highly popular with Indians. The Chilli goes by many names, all of which, however, describe the same breed. The most well-known names next to Bhut Jolokia are Naga Jolokia, Bih Jolokia and Naga Morich. The differences in the names arise because the Chilli is called differently in the various regions of India. Jolokia means Chilli in Assamic, which is why the word Jolokia appears often in its names.

The plant grows to about 120 cm high and has lots of the typical characteristics of the Capsicum Chinense. The leaves surface is somewhat wrinkly, and usually three white flowers hang grouped on one branch. There are allegedly plants that are many years old that measure a whopping 4 meters.

The peppers of the Bhut Jolokia grow to be about 5-8 cm long and 1,2 cm thick. They have a lightly wavy surface, are initially green and mature towards red. In some regions, there are Bhut Jolokia chilies that mature to be orange or brown.

The heat of a Bhut Jolokia – Respect!

In the year 2000 it became known for the first time of the existence of a chili in India, which would be hotter than the Red Savina, which was at the time the record holder in heat. After some years of research and tests, which have proven quite costly, as the Bhut Jolokia had to be multiplied, it had been established: the Bhut Jolokia is twice as hot as the Red Savina, which means super-hot! The heat degree measured by the Chile Pepper Institute is at 1.001.304 Scoville units, little above one million. It has to be said though, that the tested chili peppers were grown in New Mexico. The climate was there very hot and dry, which brings the heat a notch higher. In India, the heat level of the Bhut Jolokia varies a lot according to the weather conditions. If we grow Bhut Jolokia Plants in Germany, we will most probably not get that degree of heat, but with good fertilizing, a hothouse and as much heat and light as possible, the forming of capsaicin, the substance responsible for the heat, is facilitated.

How and where is this Indian chili cultivated?

The hot chili breed is mainly cultivated in the north-east part of India. Many Indians have a Bhut Jolokia in a shady place in the garden, but it is also common for it to be grown in big fields. Mostly the seeds are planted in a mixed culture on the rice fields. In order to fertilize the ground, in many cases bamboo is burned on the rice fields. Thanks to the climate of Assam, where the Bhut Jolokia is mostly produced, the plant can be harvested twice per season. Many Indians say that the Bhut Jolokia plants make more fruit if they stand in a shady place. Of course the chili can be found outside of north-east India as well. The plant has spread across the whole country as well as in the neighboring territories. In each region, there are minimal differences in size, shape and yield.

Cooking with the Jolokia

In India, the Bhut Jolokia is used in various ways. On one hand can it be harvested green (unripe) or red (mature). It has not only to do with the heat of the chili, but also with its typical taste. The aroma of the Bhut Jolokia changes depending on where it grows. That is why it is recommended to try this chili breed at least once in Assam, because only there will it fully develop its typical flavor. In its home country, the Bhut is used either raw or cooked with vegetables. They say that one pepper is enough for 2 meals for a family of six.

The drying of the Bhut Jolokia is, in Assam at least, quite impractical, as the climate is simply too humid in that region. That is why the peppers are rather preserved otherwise in that area. For this there are several methods. For example, the chilies are cut into slices and then put into mustard oil. Another common method is the use of lemon juice for preservation.

All prices quoted in the Pepperworld Hot Shop are inclusive of VAT, plus shipping costs depending on the country. So that you can shop comfortably, you have the following payment options available through our partners PayPal Plus and Amazon Pay

Delivery in Europe in 3 to 5 days, with DHL goGreen (exclusively climate neutral).

Important information in order to save: The small truck sign in the cart lets you know how far away you are from a free delivery! For further discounts please look at the bulk prices that are available for a lot of products!